History of the Hall

The village hall was built in 1885 on the site of a former public house called The Three Stars.
The public house had met with disapproval from the St Mary’s church congregation because coachmen were spending time there drinking, while their employers were at church. It also attracted undesirable people from beyond the parish.  St Mary’s church had been built in 1860, and it now needed a hall for church meetings and community work. 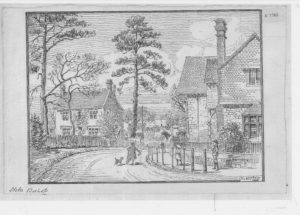 The Three Stars was demolished after the death of the landlady Eliza Bevan, and the village hall as we know it today, was built.
Three prominent local businessmen – Sir George Edwards JP, Henry Fedden and James Goodwin – were the driving force behine the building of the hall and became the first trustees.  Henry Fedden was the uncle of the hall’s architect, Edward Gabriel. 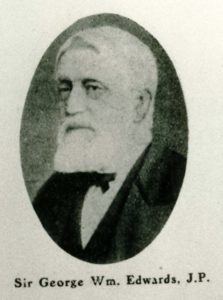 The money to build the hall was raised by public subscription.
The original hall had a sliding partition so that it could be divided into a reading room and a games room.  The caretaker’s flat above was lived in until the 1970s.

Initially the hall was used for parish council meetings and community events.  At that time Stoke Bishop was mainly fields, with most houses we know today being built in the first half of the 20th Century.

The club was started in 1893 for boys over 13 who had left school.  For a subscription they could use the library and play games, such as chess, bagatelle or billiards.  For an extra amount they could learn shorthand and woodwork.

Monthly entertainment organised during the winter months included concerts, recitals, magic lantern shows and travel talks.  Numbers were never high as the rules were strict.  No smoking, whistling or shouting were allowed, and a breach of the rules could lead to suspension for a week, fortnight or the rest of the season.

In 1897, the Boys Club gave way to a club for men over 18 where smoking was allowed, but to begin with not cards.  Numbers were still low, but improved with the provision of more games, such as quoits and ping-pong, with end of season financial prizes.  Competitions were held against teams from Horfield, St Albans and Westbury.

As well as concerts for all, there were smoking concerts for men only when they could smoke and chat.  Cards were only allowed from 1906 after a long debate and on the strict condition that only men over 21 could play. 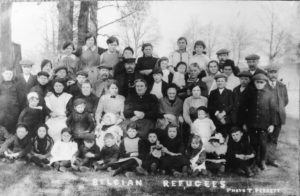 Belgian refugees on the Downs.  They used the hall during WWI.

Many members fought in the Great War.  The names of those who did not return are on the Stoke Bishop war memorial.  The former Post Office opposite the village hall was purchased as a memorial club for men, but this failed to gain much support and was let, then sold 10 years later. 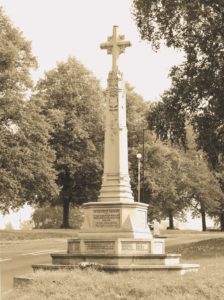 Between the two wars, the hall continued to be used for many pre-War activities.  However there were more dances, social evenings and jumble sales to accommodate the new Stoke Bishop population moving into the area as new homes were built in the surrounding fields.

The local school was burnt out in a raid in 1940 and some classes were held in the hall until 1950, when the new school at Cedar Park was opened.

1950s and Beyond Running the Hall

The hall has been updated over the decades, with the original open fires giving way to gas central heating.  The hall ceiling was lowered in 1957 to make it less draughty and a flat-roofed store room was added in the 1970s.
At the same time, the caretaker’s flat was converted into rooms for public hire.  A bar was also installed, but removed in 2015 due to lack of use.
Parish meetings in the hall ceased in 1964 on the opening of St Mary’s Church rooms next the the church in Mariner’s Drive.

Since 1973, the hall has been leased from Bristol City Council by the Stoke Bishop Community Association.  It is run by a volunteer committee and financed from letting income, fundraising events and external grants. 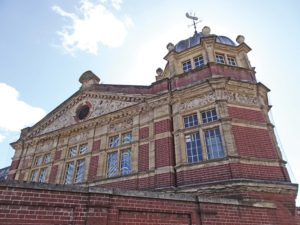 About the Architect
Edward Gabriel (1855 – 1928) designed a number of well known buildings in and around Bristol, in his distinctive Arts and Crafts style.  They include the National Nautical School, Portishead, a number of pubs, such as the Cambridge Arms in Redland and the prominent E Shed (above) at the harbour end of Bristol City centre.